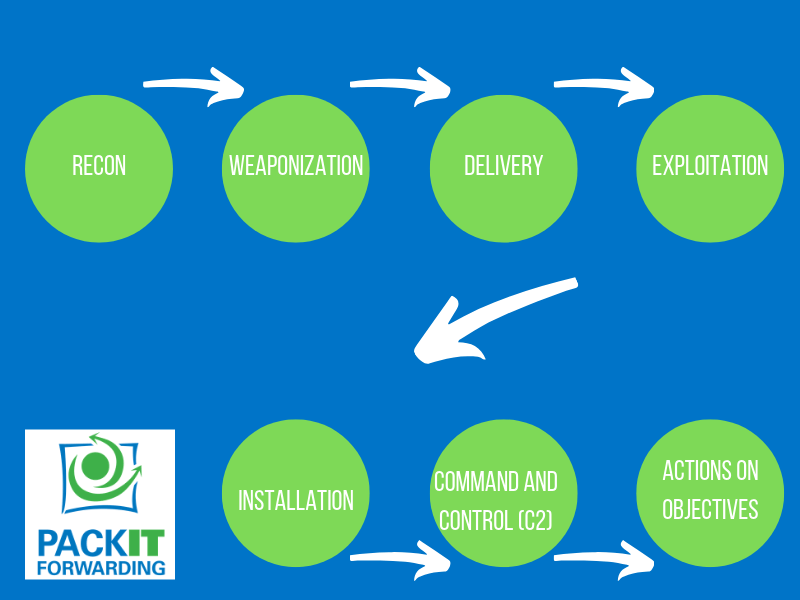 Identify stages in the cyberattack lifecycle and firewall mitigations that can prevent attacks.

The cyberattack lifecycle, or cyber kill chain, is a model to show the stages of an attack and how it can be prevented. If any one stage is stopped, the entire attack is stopped. Generally the earlier in the chain, the easier it is to stop.

This stage is when the attacker gains information about the target. Information can come from open source intelligence like Twitter, LinkedIn and the corporate website. Attackers will also scan publicly facing services for vulnerabilities.

Weaponization is the process where the attacker determines how to deliver malicious payloads to take advantage of weaknesses that were found.

This phase is when the payload is delivered into the victim organization. This could be via files, e-mail messages or malicious websites.

This is the stage where the attacker deploys an exploit against a vulnerability to gain entry to the organization.

After the attackers have gotten access to the network, they will install additional tools to maintain access, persistence and escalate their privileges.

With malware installed, the attackers can control the system. They will establish a channel for control and for sending data back to them.

Actions on the Objective

The actions completed by the attacker to achieve their goal. This could be data exfiltration, destruction, defacing a website, or to extort the victim organization.